This April, in honor of National Poetry Month, I accepted a poetry dare from TweetSpeakPoetry: to read a poem every day of the month and share it with my friends. I opted for the challenge of reading a single poet per week, mingling historical and contemporary poets.

“and I write tomorrow
on yesterday’s sheets:…”

“Don’t believe our outlines, forget them
and begin from your own words.”

Day 3 – “Who Am I, Without Exile?” by Mahmoud Darwish, Tran. Fady Joudah

“…Nothing
carries me or makes me carry an idea: not longing
and not promise. What will I do?…”

Day 4 – “To Our Land” by Mahmoud Darwish, Tran. Fady Joudah

“To our land,
and it is the one far from the adjectives of nouns,
the map of absence”

“…A noun sentence: my wounded joy
like the sunset at your strange windows.”

Day 6 – “I Belong There” by Mahmoud Darwish, Tran. Carolyn Forché and Munir Akash

“I have learned and dismantled all the words in order to draw from them a
single word: Home.”

“Atomes will dance, and measures keep just time;
And one by one will hold round circle line,”

“Thoughts as a Pen do write upon the Braine;
The Letters which wise Thoughts do write, are plaine.”

Day 9 – “An Elegy on my Brother, kill’d in these unhappy Warres” by Margaret Cavendish

“My thoughts do watch while thy sweet spirit sleeps….”

“For such is Man’s curiosity and mind,
To seek for that, which is hardest to find.”

Day 11 – “A World in an Eare-Ring” by Margaret Cavendish

“And Lightnings, Thunder, and great Winds may blow
Within this Eare-ring, yet the Eare not know.”

“This care is but a word, an empty sound,
Wherein there is no soul nor substance found;

Yet as his heir he makes it to inherit,
And all he has he leaves unto this spirit.”

Day 13 – “An Epilogue to the Above” by Margaret Cavendish

“Thus by imagination I have been
In Fairy court and seen the Fairy Queen.”

“Gray days clicked shut around them; the yoke still fit,
warm as if never shucked. The world is so small,
the evidence says, though their hearts cry, ‘Not so!'”

“And yet they were my best friends once.”

“there is no knowing
how many souls have been formed by this simple exercise.”

“The shadows have their seasons, too.”

“our small deed, that hurried day,
so amplified, like a story through layers of air
told over and over, spreading.”

“…so that the listening eye
saw suddenly the thick black lines, in shapes
of shield and cross and strut and brace, that held
the holy glowing fantasy together.”

“As if down a long tunnel of clothing and of chores;
Your clear light dims, gets dressed, drops its leaves,”

“Dust of the sea, in you
the tongue receives a kiss
from ocean night:”

“Night, snow and sand make the form
of my slim fatherland,
all silence is in its long line,”

“And the verse falls to the soul like dew to the pasture.”

Day 25 – “The Dictators” by Pablo Neruda

“The weeping cannot be seen, like a plant
whose seeds fall endlessly on the earth,”

“You’ve asked me what the lobster is weaving there with
his golden feet?
I reply, the ocean knows this.”

“The great roots of night
grow suddenly from your soul,
and the things that hide in you come out again “

Their voicing ceased, then started again, to complain
That we are offered nothing when it starts to rain
In the same way, though we are dying for the truth.

“An Adjective walked by, with her dark beauty.
The Nouns were struck, moved, changed.”

“Yet often, looking toward the horizon
There—inimical to you?—is that something you have never found” 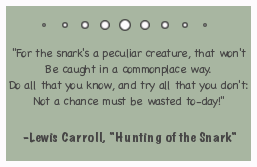 facingthegrey
a welcoming place
Hyperbole and a Half

Thoughts on the Road

Gracious Living in a Zombie World: A Ladies’ Handbook

Why just survive when you can thrive?

The blog seen round the world!—alanajustfauxfun

Service Industry Stories and More Since 2012

a blog written by the intern at winston-salem's a/perture cinema.

Photographs from my world.

Tales from the Reading Room

A Literary Salon Where All Are Welcome

It's a Wine Life: Musings and Tastings